Re-entry from the Twilight Zone 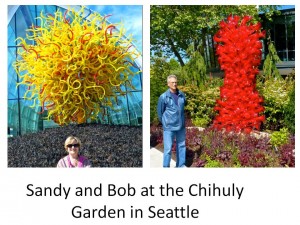 WOW!! It’s been over 5 months since we put out our last blog (“Here We Go Again…Approaching Warp Speed”). Time flies by. In that blog I talked about how our glass firings and fairs had us out of control, but ended it on an optimistic note saying that I expected that we would be “on an even and balanced keel within a few weeks”. Well, I was definitely dreaming because it isn’t until now that we are shaking our heads and saying…”What are we doing?? We are way out of control and need to get a grip… a grip on some kind of balance.” We have lost touch… with you as well as with ourselves.

These past five months have been crazy for us, but not just working on our glass art. We did fit in a six week driving trip on the mainland. It seemed like a good idea for a vacation, getting us away from glass making. While it was good in that we saw beautiful country, went to interesting places, and met interesting people, AND didn’t do glass, it was a bit nuts because we spent most of the time driving. We logged 7000 miles on our rental Ford Escape SUV. (I must say by the way that the Escape was very comfortable. I recommend it and would buy one myself if I hadn’t just gotten a Honda CRV last year.) Anyway, the driving trip wasn’t exactly relaxing. We had pre-booked hotels, some prepaid, and needed to be certain places by certain times. We replaced a “forced march” in glass firings with a forced march in driving… sort of out of the frying pan into the fire.

We got back from the trip mid-June and of course, having missed six weeks of glass making, we pushed ourselves again. We HAD to finish our website revision, we HAD to make some new glass pieces, we HAD to recover from our trip…like the Mad Hatter, we HAD “things to do, places to go!” But, “the hurrier we went, the behinder we got.” We have a list a mile long! We needed an intervention. Keo (our dog) barked at us today, demanding that we go for a coffee break. (He really likes The Coffee Bean in Wailea.) He woke us up… we needed to smell the coffee. It was time to re-enter a life with balance, come back from the Twilight Zone to the present. It was time to join the living and share with our friends the good stuff from the past five months, and in particular the trip.

So, that’s what we are going to do over the next couple of months. Today, let me just mention a couple of things that we will talk about in later blogs. We saw Chihuly’s work in Seattle and Tacoma…a world renowned glass blower. Some say he’s #1. The photos attached show us in the Chihuly Garden outside his museum in Seattle. In back of us are two of his glass sculptures. They stood about 8-10 feet tall and the yellow one behind Sandy is over 8 feet in diameter towards in the middle. That’s a ton of glass… literally! We’ll devote a later blog to his work that we saw in Seattle and Tacoma. Other things of interest to share (in later blogs) include the VIP tour we received of the Bullseye Glass factory in Portland, Oregon, (where we get our glass from), the meeting of glass blowers in Cannon Beach, Oregon, who have a direct connection to glass blowers here in Maui (the Worcester family), the art museums in Chicago and New York, and more.

We are hitting the air brakes and slowing down for re-entry and soft landing. We look forward to sharing and interacting with you.

A Hui Hou (or “Later” if you don’t know Hawaiian)