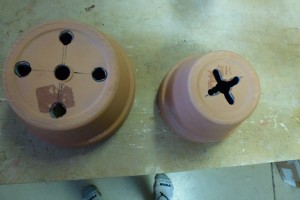 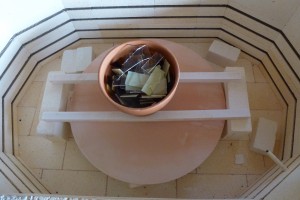 Figure 2…Drop Pot filled with glass and suspended in kiln. 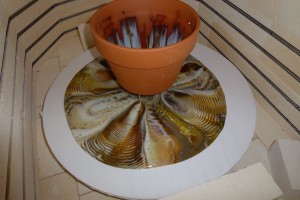 Figure 3…Drop Pot result in kiln after cool down. 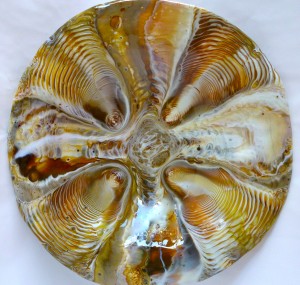 The technique involves placement of colored glass in a terra cotta flower pot in which the drainage hole at the bottom has been modified.  We have experimented with a number of configurations ranging from 4 holes to 9 holes, circular holes, oblong holes, even cruciform holes. Figure 1 shows two of the pot hole configurations we’ve used. The color choice of glass as well as mix percentages are critical to the outcome.  The pot is suspended above a kiln shelf as shown in Figure 2. Care must be exercised to level the shelf as well as the suspended pot. In addition, the amount of glass in the pot must be measured and limited to make sure the resultant piece doesn’t exceed the available area on the collection shelf.

The temperature of the kiln is then brought to 1600 degrees F. At this temperature, the glass achieves the consistency of molasses and slowly flows out of the holes in the pot onto the shelf. The 1600 degrees is maintained for 3 hours. It takes that long for most of the glass to drop from the pot onto the shelf. The resultant pool of glass tends to be circular provided the shelf and pot were properly leveled. After the melting phase, the kiln is allowed to cool down to the annealing temperature (900 degrees) where it is held for 3 hours to equalize thermal stresses in the piece. After that follows the slow cool down to room temperature. Because of the long fusing time and annealing time, the process usually takes about 36 hours. Figure 3 shows a resulting drop pot as it flowed onto the kiln shelf.

Although we have used some drop pot pieces for clocks, we usually slump them into organic shaped bowls. The molds we use are hand made and result in an organic undulating rim. As with the pattern bars, the slumping of drop pot pieces requires a slow rise to 1200, a 20 minute hold there, then after cool down to the  annealing temperature, a 3 hour hold there. Figure 4 shows a resultant slumped drop pot bowl.