“Sorry Bob”…Then she did the Happy Dance!! 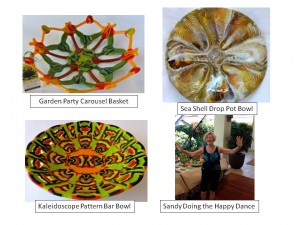 Sandy and I are very competitive…in a healthy way. When we play cards or dominoes, tennis or ping pong, bowling or pool, we are out to WIN! As children we were both “sore losers”, and still feel a twinge when we come up on the short side. But, playing these games is the way we relax. Lately we’ve been playing a silly card game called “Hand and Foot”. Over the last few weeks, Sandy has been cleaning my clock…I’ve lost 95% of the games we’ve played. This “competition” also extends to our work with glass, with the past week being an interesting scenario.

Our competition in glass is really not as serious as when we play Hand & Foot or Mexican Train (dominoes).We arm wrestle (figuratively…since my psyche couldn’t take a physical loss)…we arm wrestle on who gets to use the kiln on which day. We share kiln time pretty well…at least most of the time. It gets a little contentious when we are both striving to have something new for an impending show…but we work it out. As she says to people who remark on how wonderful it is that we work together…”Well, we haven’t killed each other…(yet)”

Last weekend the competition entered the arena of whose glass art sold better. The weekend before I sold a few of our pieces to a couple from Texas who were at the Marriott for their daughter’s wedding. They bought one of my carousel baskets (“Take a Bow”). Sandy was happy for me but she was ready for some of her pieces to be taken. Sure enough, on Saturday while under the Banyan Tree in Lahaina, two jovial sisters from California, Karen and Sharon, bought several of our pieces including a small bowl she recently created. It was a bubble motif bowl with the bubbles defining a heart shape and the glass in transparent purple. This was a trifecta piece for Sandy because she loves doing the bubble motif, she Loves hearts, and she LOVES purple. She was very pleased that the “sisters” appreciated it and brought it home. (Since it was so new, I unfortunately didn’t get a photo of it to show.)

On Sunday morning (also under the Banyan), Sadie and Ron from Arizona came by our display table and were attracted to two pieces…one being my carousel basket called “The Garden Party”, the other being a drop pot created by Sandy that looked like the inside of a seashell. They thought about it for a while (maybe 20 minutes) then decided on my carousel basket. Ron sensed our competition and said…”Sorry Sandy!” Hooray for me…score 2 for Bob, 1 for Sandy…but not for long. Later that morning, Sue and Biff from Oklahoma came by and were instantly drawn to Sandy’s drop pot sea shell bowl. They thought about it for 5 minutes and decided to purchase it. It is a beautiful piece and they were quite excited about it…even taking a picture of it to share with friends back home. Two to two now.

Then came Monday at the Marriott. Sandy brought two of her pattern bar bowls which she also loved but hadn’t displayed for a while. The timing was perfect. Diane and Rick from Texas came by our display and immediately gravitated to the pattern bar bowls. They loved the colors and said either one would be perfect on their coffee table. They decided on Sandy’s “Kaleidoscope” bowl. Deja vu…just like Hand and Foot…Sandy is beating me yet again. Then the coup de gras…Terri from California came by to buy some presents for friends. After thinking about her friends’ color preferences, she decided on two night lights and two cheese plates…all Sandy’s. We staple our business card to the receipt. Sandy said with a smile… “Well, since these are mine I guess I’ll just have to staple MY card to the receipt!!” Ouch! Terri said…”Sorry Bob!” After Terri left with her purchase, Sandy did the “Happy Dance”!

Oh well…it was decisive. I am very pleased for Sandy…”a happy wife is a happy life”. Mahalo to everyone who made our week so successful. And just let me say this about that…To Whom It May Concern…GAME ON!!