It’s Been a Hectic Month and a Half 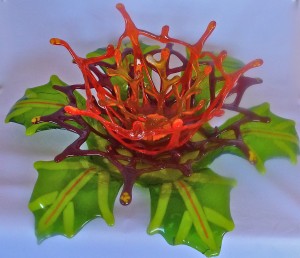 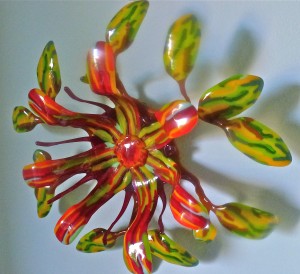 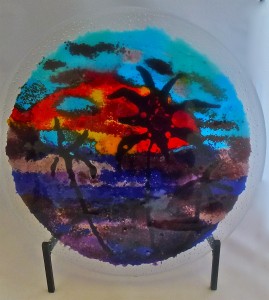 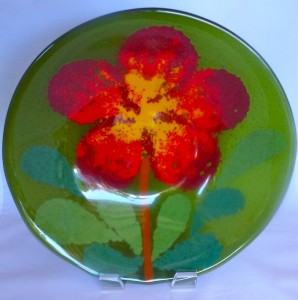 The six weeks from the beginning of February through mid-March were a whirling derby because of Maui Open Studios in February and juried art exhibitions during the first weeks of March. Looking back at last year’s blog at this same time, I wrote about being out of control with our pre-occupation with doing glass art. Well, same thing this year, and probably next year and the year after… as long as we participate in Maui Open Studios and working towards getting pieces into juried shows on Maui. Oh well… it’s a love/hate thing. We love doing the glass art and the excitement of participating in MOS and the potential of the juried shows. But, we are less than happy with the anxiety and chaos that inevitably accompanies it.
Maui Open Studios was quite successful for us. We were well prepared in terms of glass art stock. We spent the first three weeks of February making pieces for the show… pieces that ranged from 6 inch dished to large 17 inch bowls. A couple of those pieces were shown in our “What’s New” blurb sent out in early February.

We sold a nice assortment of glass art… both Sandy’s and Bob’s… as well as several of Sandy’s paintings. One customer couple (Laura and Frank) loved Sandy’s “Sunrise/Sunset” bowl (shown in “What’s New”), but wanted to hang it in a circular window of their home. I didn’t feel comfortable in drilling holes into the rim of the bowl shaped piece so they commissioned Sandy to create another piece like it, unslumped and larger. All and all, with that commission and the other sales, we almost doubled MOS 2013. That was definitely good… a big Mahalo to all those that visited our studio that weekend. It also turns out that with all the pieces we made in preparing for MOS, we are well stocked for a while.

We did have a drawing… actually 3 drawings… for pieces of our glass art. The winner of the first piece (a Candy/Dip Bowl) was Gerrit of Hawaii. The second drawing was for a 6 inch dish, and Karen from Kihei won that one. The last drawing was for a cheese plate, and Jennifer of California won that piece.

Even though it has been six weeks since our MOS 2014 weekend, our house is still not quite back in order. Nevertheless, we are quite pleased with the result and plan to do it again in 2015.

One of the reasons we haven’t gotten our house back together is that we then needed to jump on preparing to make some glass art for two juried shows… Art Maui which required pieces be submitted on 11 March and the Cutting Edge Glass and Metal show which required submission on 18 March. We also needed to see and meet our brand new granddaughter, Joia, born on 5 February on Kauai. So we took a few days off to do that first… right after our Marriott duty on Monday and a few other things that needed tending. It became clear that we both couldn’t get something together for Art Maui with the limited kiln firing days we had available. Sandy agreed to give me the front end so I could get a couple of pieces done for the Art Maui deadline, and she would work the next week for the Cutting Edge show.

I made two pieces for the Art Maui show… “Splash Pattern Blossom” which is a table top sculptural piece and “Wall Flower Waiting to be Noticed”, a wall hanging sculpture. These pieces are shown in the photos attached. I was on time to submit these to Art Maui but as luck would have it, as I turned Wallflower over to attach a label on the bottom, I snapped one of the delicate red spires… oh well, I didn’t cry… maybe cussed a little… but took it in stride. Anyway, good news/bad news on Splash Pattern… it wasn’t accepted into the Art Maui show, but on the bright side, I now had a new piece for the Cutting Edge show. Hot dog!!

Sandy used her week with the kiln to create two new pieces as well. One was an extension of her Sunrise/Sunset piece called “Silhouettes at Maui Sunset”. This was inspired by a painting she had done several years before. The piece came out nicely but had a small issue that required an additional kiln day she didn’t have, so it didn’t make it into the show. The other piece she made called “Rosie Posie” did come out as planned and was submitted for consideration on the 18th. We were allowed to submit up to 3 pieces each for the show, which we did, selecting pieces we had created earlier. The only requirement was that it had to be less than two years old, so we had plenty to choose from. Photos of Sandy’s two new pieces (Silhouettes and Posie) are also attached to this blog posting.

The judges were tough and very discriminating. I am pleased to say that one of Sandy’s pieces was selected to be in the show. Congrats to her!! Me, not so much… maybe next year. But, there is a silver lining. Two of the pieces not selected by the jury judges were purchased this past week at the Marriott… clearly by people who had a better eye than those judges!!

And now, finally, we can slow down and re-establish balance.