And the Winners Are….

A couple of weeks ago, I had the opportunity to show our glass art in a small gallery in Sisters, Oregon, a town nearby Bend. The mini gallery is made available to local artists for a week by the Open Door restaurant. My week ran from Monday August 14th through Saturday August 19th, just before the Central Oregon sun eclipse on August 21st. To honor the solar event, we offered our glass art at a 20% discount, as well as to have two raffles for visitors to our mini gallery. Over 200 people participated in the raffles which were for cheese plates (each an eighty dollar value) of the winners’ choice. Most participants were from Oregon, Washington, and California, but some were from across the country, as well as  from other countries ( Canada, UK, Australia, and Israel). The Wednesday’s drawing winner was Derek G of Sisters. I particularly remember his filling out the ticket because I told him that his sweetheart could also submit a ticket, but Derek’s response was…”No need… THIS is the winning ticket!!”… as he placed it in the ticket container. “ Okay… SURE!!”… I thought.  Well, I was absolutely bowled over when the hostess on duty pulled Derek’s ticket from the pile of about 120 at that point on Wednesday evening. Derek and his sweetheart came by on Thursday and selected a cheese plate with a Plumeria flower on an orange background. A photo of the couple in front of the mini gallery is shown below. 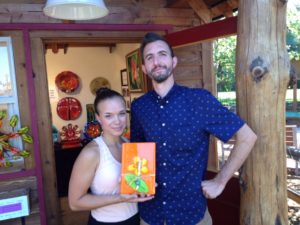 The second drawing occurred on Saturday evening. Getting the second winner lined up turned out to be quite a saga! The restaurant hostess on duty that evening pulled Gayle B’s ticket from a pile of over 200 entries. In response to being notified that she had won, Gayle expressed excitement in winning, but wanted to wait until the eclipse mania had subsided. Then circumstances got complicated for her, and she told me to pull another name. The hostess had actually pulled a second ticket as a back-up which was Marsha R of Oregon. I emailed Marsha  a couple of times that she had been selected, but got no response. Since I was leaving for a 3 week vacation, I had to tell Marsha that I was going to replace her by drawing another ticket, which I did. After I had contacted the back up to the back up, Marsha contacted me, saying she was in an area that had no service and didn’t get my emails until Sunday. The die was cast and she graciously said she understood. As it turned out, the back up to Marsha (who shall remain nameless) decided my offer was a scam and declined. Clearly the Universe wanted Marsha R to be the second winner, so I emailed her again, and we are good to go. She will select her plate after we return at the end of September. Good idea because Bend is inundated with smoke from the fires around us. So again, congratulations to the winners, Derek of Sisters and Marsha of somewhere Oregon.

To commemorate the eclipse, we created an Eclipse Cheese Plate. Two versions of it are shown in the photos below. Each cheese plate has engraved on the back “8/21/17 Eclipse in Central Oregon”. We actually have about 8 left… so if you were hoping to win one, you may still purchase one at the 20% discount price of $64. Also relative to the eclipse, one customer (Bruce) suggested I put a black noon in the center of my Wallflower sculpture. I’ve decided its a great idea. Two photos below show the before and after. I will rename “Wallflower” to “The  Eclipsed Sun Flower”. What do you think??? 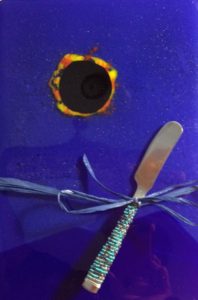 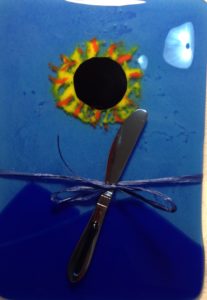