It’s been four months since we posted a “What’s New” due to various distractions… mainly needing both hips replaced… that has gotten our glass art off track. However, based on input I received last August from a fellow glass artist (whose name, I’m sorry to say, I don’t have), where she suggested we consider “Screen Drops” instead of “Drop Pots” to achieve organic fluid effects in our glass art, we are really excited to get into it.

We have used Drop Pots extensively for about seven years now, and have learned quite a bit about how to create pieces of beauty. Drop pots are terra cotta pots with several holes on the bottom. Cut glass of selected colors is stacked into the pot in a predetermined pattern. The stacked pot is suspended above a kiln shelf, heated to 1600 degrees for several hours to allow molten glass to drip through the holes onto the shelf. (A more detailed description of the process can be found under “How It’s Done…Drop Pots”). Early Drop Pot pieces were a “crap shoot” as they say… we really didn’t know what we were going to get. Sometimes it was “Wow, really neat!”, and sometimes it was “What the heck??” Early on, we didn’t do a good job of recording our process so we could reproduce good results and avoid the not so good ones.  Two of our early results are shown below… a good one and a not so good one. Also shown is a recent drop pot where we were a bit more cognizant of the “Does and Don’ts” for Drop Pots… and we think the result is quite nice. 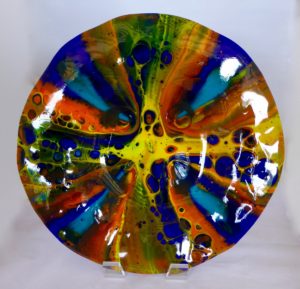 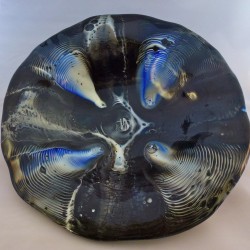 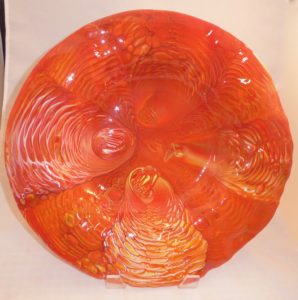 The first one wasn’t what we were expecting, but serendipitously  “really neat”. The second one fit the “What the heck??” category. We mixed blue glass with French vanilla and got black!! Go figure! Well, Chemistry 101 had the answer. The copper in the blue glass reacted with the sulfur in the vanilla glass to make black. In the third piece we mixed reds which are sulfur based with the vanilla, also sulfur based, to avoid the unpleasant reaction seen in #2. The molten glass colors in Drop Pots mix as they pour through the holes at the bottom of the pot…hence you aren’t sure what you are going to get.

This past October, we ran out of terra cotta pots, and remembering the suggestion of the glass artist that I saw in August, I thought we should try a Screen Drop.  We had actually tried a Screen Drop several years ago, but weren’t pleased with the result at that time. It wasn’t terrible, but we had concerns about various things… like re-use of the stainless steel screen. The screens are quite expensive. We were concerned about color contamination from use to use and thought we would need multiple screens, each devoted to a specific color combination, so we decided to stick with Drop Pots back then. The blue center portion of the bowl shown below was created by our first Screen Drop years ago. 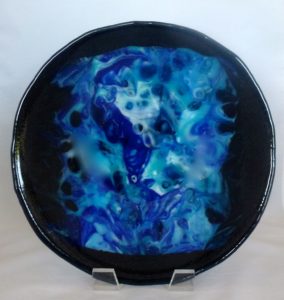 In my re-try this October, I stacked Teal and Jade green glass (copper based) in a donut shape on the old screen and put reds and some yellows (sulfur based) in the center. I ignored the residual blue glass on the screen from the earlier attempt. Much to my surprise, the resultant piece is quite beautiful. It is shown in the photo below. Screen Drops act differently in that you have more control on how colors mix. The screen is a 12″x12″ stainless steel quarter inch mesh. Pieces of glass are stacked on the screen which is suspended (like a Drop Pot) above a kiln shelf. Temperature is brought to 1600 degrees so the glass on the screen melts through the mesh onto the kiln shelf. Because the glass isn’t contained like it is in a Drop Pot, the colors don’t mix like they do in the Drop Pot. So unless you directly mix reactive colors on the screen, you don’t get the “What the…??” result. 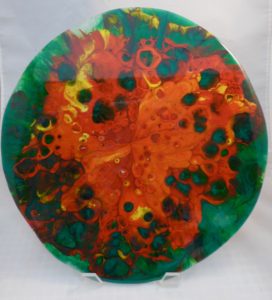 The fact that the greens basically stayed separate from the reds and yellows, avoiding the reaction a Drop Pot would have resulted in opens all kind of possibilities for color combinations. We are very excited about the prospects. We are on hold for the moment, but should be back in full swing by March. Stay tuned for some exciting “really neat” pieces.