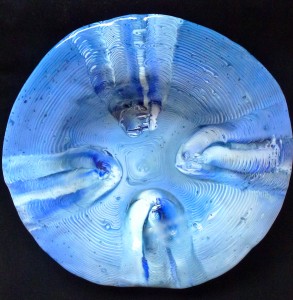 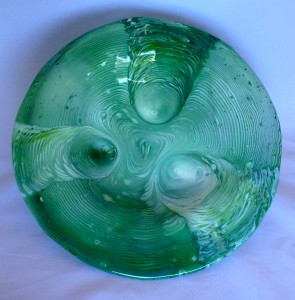 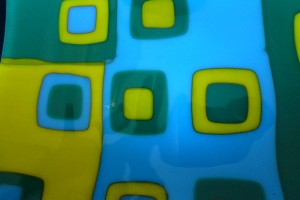 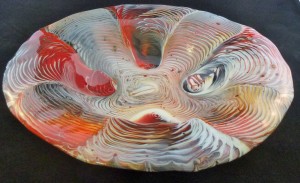 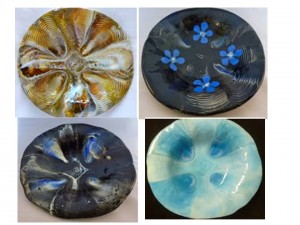 A drop pot bowl that was admired by many before it was sold to a nice couple from Oklahoma was our Tortoise Shell Bowl shown in the first photo (upper left). We had documented the mixture of glass used to create the piece including color, transparency, and weight. Even so, it is impossible to create a duplicate. The glass was cut into hundreds of pieces and laid into the drop pot, the details of which were not recorded. A repeat of the colors and proportions will yield a similar, but unique piece.

Anyway, we wanted to create a similar piece but in blues instead of browns and amber. We substituted dark cobalt blue for the brown and a mixture of cyan and turquoise for the amber and tan, keeping the whites and clears the same. The piece was to be smaller so we proportioned the weights down. We fired up the kiln and waited with excited anticipation to see our Tortoise Shell in blue. The firing cycle takes over 24 hours to go from start to when it has cooled down sufficiently so we can open the kiln. When we did and took a quick look… ”OMG, what on earth!!” The piece was just about black with a hint of blue and some white…nothing like we expected. A photo of the piece is shown to the right of the Tortoise Shell photo. (The blue flowers were added afterwards to make it more interesting.)

We were in total disbelief… and denial. So what did we do…”let’s do it again…this time bigger…full size!!” We used the same exact formula as the Tortoise Shell, just with blues instead of browns. Lo and behold, what did we get??…Basically the same thing again! (See photo below Tortoise Shell.) What’s that saying? …”The definition of insanity is doing the same thing and expecting a different result”. Well, that’s the “Meshugeh” part of the title. Meshugeh is” loco” in Yiddish. My consolation is what Father Zeoli (my 6th grade Religion teacher) used to say…”a jackass doesn’t fall into the same hole twice”. So, I’m not one of those…I feel better!

We still need to figure this out. Seems like the chemical compounds in blue react with the other color compounds…but who would have ever guessed BLACK! We are working on it. We shook things up on the next attempt and got a sweet blue (shown in the fourth photo)… not what we wanted but at least it is blue, not black. Now to get somewhere in between! We’ll let you know when we’ve cracked the nut.